The intensification of clashes between armed gangs in the metropolitan region of Port-au-Prince, capital of Haiti, since Sunday (20), has forced the mass exodus of the population and left civilians killed this week alone. The country’s situation is among the ten most worrying conflicts in the world in 2022, according to a survey by the Data Project of Armed Conflict Location and Events (Acled). The report warns of the “high risk of escalating gang violence amid political instability”, exacerbated by the July 7 assassination of President Jovenel Moïse. International analysts fear that the dispute between gangs will evolve into an armed conflict in the country.

The UN calculates that 3882726 , 5,000 Haitians are out of their homes, half of them sheltering with family members or friends and the other half in informal settlements or camps. This week, hundreds more families left their homes in the capital and took refuge in schools, relatives’ homes or began to live on the streets.

Data from the Civil Protection show that a new wave of violence by the groups criminals in recent days has resulted in the murder of at least 20 civilians, with reports of house burning, looting and rape. According to Agence France-Presse, the local police reported that the deaths recorded since Sunday, in the northern part of Port-au-Prince, include “a family of eight” people, in addition to “three young women and three children”.

“Gang Gunmen’ 400 Mawozo’ they set fire to my house and killed several of my neighbors before burning their house down,” a resident of one of the violent neighborhoods in the north of the capital, who preferred to identify himself only as Lucien, told AFP, for fear of reprisals. “Women and children are raped when they manage to get into a house,” said the Haitian, who was forced to leave his home to take refuge with his sick mother in a square on Tuesday (20).

A young man of 16 year, who asked not to be named, reported that her little brother was hit by a stray bullet in the leg indoors on Sunday. “We managed to stop the bleeding, but we can’t risk taking him to the hospital and we don’t have any medicine to relieve his pain either,” he told France-Presse.

Since the beginning of the week, dozens of Haitians are seen in Clercine square, in the Tabarre neighborhood, near the US embassy. They bring clothes in baskets, backpacks or bags and prepare their food in the middle of the street. The displaced flee clashes between the armed group 400 Mawozo and the rival gang Chen Mechan, who fight for control of territory in the districts of Croix-des-Bouquets, Croix-des-Mission, Butte Boyer and Bon Repos.

Sheltered in the square, a man who identified himself as Woodens told Agência EFE that he has been on the street for five days. “My house is in ashes. I lost everything. We are sleeping on the street as a result of this war, in the face of which the authorities can do nothing. I have no expectations from the authorities, we just want a place to sleep”, he pleaded.

Similar is the story of Rosmine Forcilus, who fled Butte Boyer with her children: “Hunger is killing us, but I don’t want to go back to the area. I want to go live somewhere else.” The same thing happens with Pierre Wilguens, who defines himself as “a refugee from war”. 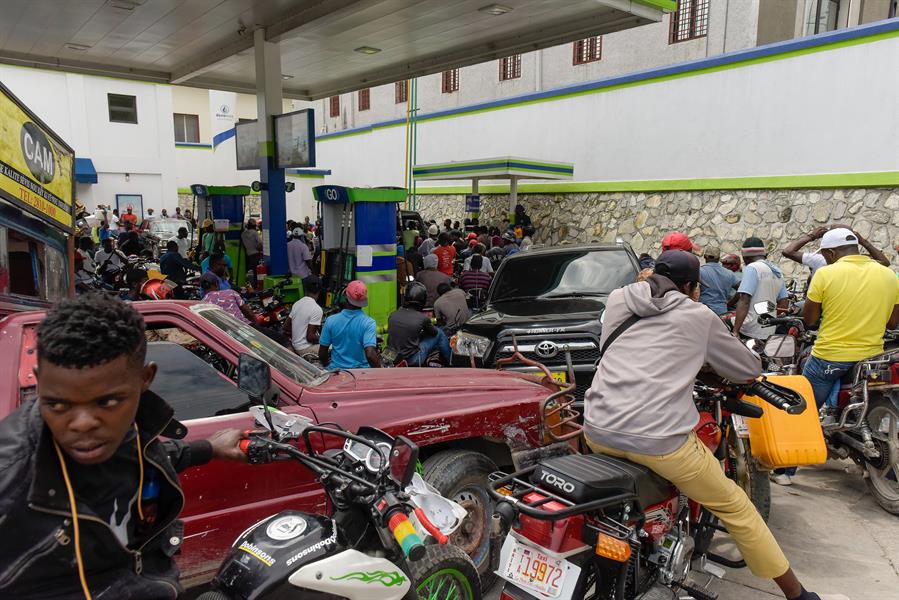 Last year, Acled recorded the highest levels of violence against civilians in Haiti since the annual study began made in 2018. Only in April 2012 (two months before a constitutional referendum, which was scheduled for June and was postponed due to the pandemic), kidnappings increased approximately 200% compared to the previous month. “The increase in kidnappings for ransom may have resulted from gangs aiming to gather financial resources for their own ends or to support their political allies ahead of important elections, such as the referendum”, analyzes Acled, which is based on reports published in the press.

More than 400 people were kidnapped by gangs in Haiti in 2022, according to the BBC. The humanitarian situation in the country was further worsened by an earthquake recorded in August, which left 2,000 dead, and with the large flow of illegal immigrants trying to enter the United States in October.

At the end March, when the war in Ukraine completed one month and the basic food basket had exceeded US$ 20 to US$ 67067 , the World Food Program (WFP) was already warning of food insecurity in Haiti, which affected 31% of the population, or 4.5 million people. Of this total, 1.3 million Haitians were in an even worse situation, in need of emergency support. The trend is for the scenario to worsen, with new increases in food prices, mainly resulting from the conflict in Eastern Europe.

The Deputy Representative of the United Nations Food and Agriculture Organization (FAO) in the country, Patrick David, stated that 54 thousand Haitian children were malnourished in March. He recalled that the food situation in Haiti is the result of natural factors such as the earthquake in August and the lack of rain, combined with the deterioration of the economy and growing insecurity in the capital region.

A member of the United Nations Development Program (UNDP) team in Haiti, identified only by the fictitious name Samuel , reported to the UN website this month, in which he tells what it is like to live constantly in fear of kidnapping. “Many people believe that all UN staff and people who work for international organizations are rich, and this generates envy and even hatred among those who don’t have the same opportunities as us, in a country with a very high unemployment rate.”

In their routine in Port-au-Prince, in addition to being careful with sharing personal information and choosing routes to work, there is also the daily nostalgia of their two children, who study in another locality and only see their parents on weekends, when it is possible to make the trip to them. “Otherwise, we can only communicate by phone, as if we were living in another country. Commuting is very dangerous. Authorities have lost control of the main transport routes to the south and east of the city, through areas such as Martissant and Croix. -des-Bouquets, and gangsters are looting the population, raping women and shooting bus or car passengers”, he detailed.

To travel through these locations, according to Samuel, is to be prepared to face “human bodies, left on the side of the road to be eaten by dogs”. “I doubt that the deaths in Martissant appear in the official death statistics,” he denounced. “Haiti’s future is very uncertain. It’s a total terror situation. I feel like I’m in a dying country”, lamented the UN official.

Appointed by Moïse as prime minister, Ariel Henry took over the country on an interim basis after the president’s assassination. A factional agreement provides for Henry to remain in power until elections, scheduled for this year but not yet scheduled. Some gangs demand the resignation of the prime minister, including using blockades on the distribution of fuel in the country as a means of pressure.

On Monday (17), long lines of vehicles were seen at stations in Port-au-Prince , which has been suffering from a fuel shortage for several days. The Monitoring Office for Development Assistance Programs (BMPAD, for its acronym in French) assured that the oil companies have placed orders and that others will be placed as soon as possible to guarantee the permanent availability of fuels in the country. The population criticized an alleged attempt by “economic agents” to create a crisis to pressure higher prices.

As a consequence of the situation, the number of cars on the streets begins to decrease and people are already afraid that the price of public transport will increase in the coming days. According to the EFE Agency, the company Sunrise Airways reported on its Twitter account that, due to fuel shortages at the international airport of Port-au-Prince, some of its flights “may be delayed or cancelled”.

“The end of Haiti’s political crisis seems a distant prospect. Continued instability will likely provide fertile ground for gang unrest and violence to continue in 2022”, provides for Acled.

On Tuesday, the Brazilian government informed that it has renewed until 31 December the deadline for granting a temporary visa and humanitarian residency to Haitians. The objective, according to the Ministries of Justice and Public Security and of Foreign Affairs, is to ensure “the continuity of the reception policy adopted by the country since the year of 2012, motivated by the large-scale calamity situation and environmental disaster, with the worsening of the country’s humanitarian situation”. The government “does not rule out the possibility that other measures may be adopted by the Brazilian State to protect Haitian nationals and stateless persons residing in Haiti.”