Although all opinion polls on abortion carried out in recent years show without the slightest doubt that the majority of Brazilians are opposed to the legalization of the practice, the position of most major media outlets in the country is implicit or explicitly in favor of the voluntary termination of pregnancy, sometimes defending free abortion even in editorials and reaching the level of militancy on the subject. This discrepancy is not new to any analyst or interested in the subject, but not many are aware of the wide range of causes that generate the effect of coverages that are mostly hostile to the pro-life position.

Added to the most obvious reasons, such as the ideological rigging of journalism faculties or the culture of a “spiral of silence” that prevails in many newsrooms, pressing for dissenters not to express themselves, there is the seductive incentive of the not insignificant resources coming from foreign organizations interested in expanding the culture of abortion throughout the West. These millionaire entities know that the press, when acting in a homogeneous way, is capable of producing the illusion of social consensus, leading many people to believe that an objectively heinous act, such as killing an unborn baby in the mother’s womb, can become acceptable.

Of course, freedom of expression on the internet has hampered the success of this strategy, at least in public opinion, but even so, the rich abortion promotion industry has never stopped trying and the money never stopped coming.

The Instituto Patrícia Galvão, for example, is one of the most committed entities for the legalization of abortion to be defended and adopted as a standard by the Brazilian press. The NGO presents itself as a “feminist organization that since 2001 has strategically acted in the articulation between the demands of the women’s rights and the visibility and public debate on these issues in the media”. Her professional routine would be to give “support to journalists and communicators in the dissemination of the rights of women’s agendas”. The institute frequently sends suggestions for topics, promotes opinion polls and organizes events.

In September last year, the NGO launched the publication ‘Women’s sexual and reproductive health: a guide to better understanding and communicating ‘, material produced in partnership with the United Nations Population Fund (UNFPA), an entity presented in the material as “the United Nations sexual and reproductive health agency”.

The guide is intended primarily for to communication professionals and intends to help them “communicate with quality about sexual and reproductive health”, including abortion in this concept. The publication features an entire chapter dedicated to the topic, in which the institute’s concern with the bad image that abortion has in Brazilian society is revealed. In a certain passage, the text warns journalists that “the use of stigmatizing and inappropriate language and images contributes to perpetuating and strengthening the stigma of abortion in society”. At this point, there is no specification of what would be “inadequate”, but the table that follows is uniquely clear.

What to avoid and prefer

In it, journalists are recommended to avoid terms such as “baby” or “unborn child” when talking about abortion. Instead, professionals learn that they should prefer the use of “embryo” – a term that the institute considers to be used until the tenth week of gestation – or “fetus”, when the pregnancy goes beyond weeks. In the justification, the NGO is emphatic in stating that “the embryo or fetus is not a baby”. Then, when teaching journalists to write about babies who have just been aborted by their mothers, the guide considers that “when it comes to tissue examined after a surgical abortion, the appropriate term is ‘product of conception’.

Those who follow the Patrícia Galvão Institute guide also learn to avoid using “images of visibly pregnant women” when talking about abortion. According to the NGO, “if the intention is to show a pregnancy”, the preferable would be “an image of a positive pregnancy test”.

Other terms included in the list of those to be avoided by the press when dealing with abortion are “mother”, which in this circumstance can be replaced by “pregnant woman”, and “father”, whose suitable substitute would be “parent or partner of a pregnant woman”. The explanation for this unusual substitution is that the use of “father” and “mother” would make the mistake of “incorrectly informing that the fetus is a child” – as if it were only possible to be father and mother of children. In addition, says the NGO, during pregnancy the use of these words “is loaded with values ​​and imposes roles on this woman or man, which may not be consistent with their decisions”.

The list is extensive and can be seen in its entirety in the following images:

For the philosopher, columnist for Gazeta do Povo and author of the book ‘Against Abortion’ (Record, 2017) the list of recommendations with “avoid” and “prefer” is very similar to the Newspeak described in the work 1984, by George Orwell, configuring a kind of language engineering. “It’s bizarre, as if they were creating a Newspeak dictionary to change the way of thinking. They try to impoverish language, as if language impoverished reality, but deep down what the change of language impoverishes is only thought, which allows for contradictions of this nature”. For Razzo, the authors of the document are concerned with polishing the words, changing the effects that the language has, so that abortion is accepted as freedom. “They treat abortion as if it were not something necessarily pernicious and perverse, as if it were not the conscious interruption of a life in gestation, of someone who will die”, highlights Razzo.

Another scholar on the subject analyzing the material was Marlon Derosa, organizer of the book ‘We need to talk about abortion: myths and truths’ (Estudos Nacionais, ) which brings together articles by doctors, jurists and other professionals who deal with the subject. For him, the booklet is an instrument of the international lobby for population control. Derosa explains that UNFPA, a partner of the institute, invests more than 43% of its capital in ‘reproductive rights’ and ‘gender’ actions, guidelines that generate lower birth rates. “The name of the fund already says that the problem is “population” and not women’s rights. The rights narrative is just the slogan that hides the objective of reducing the birth rate of poor countries”.

In fact, as stated on the UNFPA website, only in 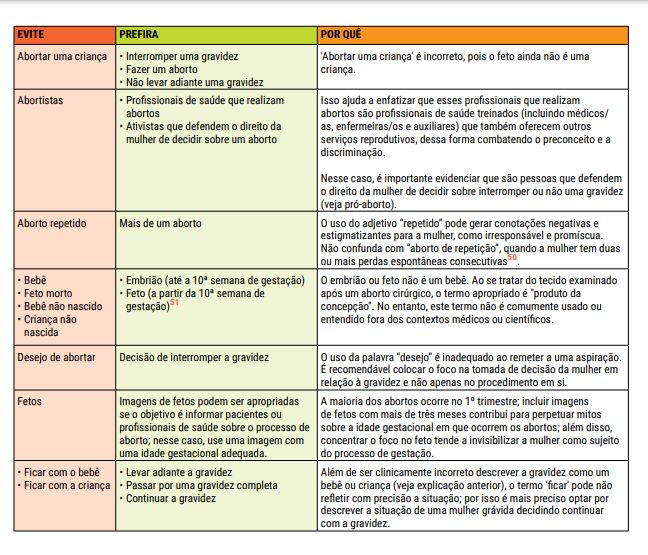 , for example, were invested 45, 4 million dollars in programs in Latin America and the Caribbean, 43 % of this in ‘sexual and reproductive health’ and ‘gender’ programs that include public policies to facilitate access to abortion.For Derosa, it is in this context that the publication of Instituto Patrícia Galvão should be read, which aims to “guide journalists from sectors of the media to avoid the humanization of the baby, using euphemisms, words more palatable to the lay public, and thus making abortion an accepted agenda, that is, they wish to obscure things.”

UNPFA is not the only foreign organization promoting abortion to sign a partnership with Instituto Patrícia Galvão in Brazil. , Gazeta do Povo revealed that the NGO received from the North American Ford Foundation the amount of approximately US$ 1.3 million, equivalent to R$ 6,04 million at current rates.

The Ford Foundation has a notorious predilection for funding ideologically progressive projects, such as legalizing abortion. In Brazil, in addition to the Patrícia Galvão Institute, the entity has also financed the NGO Catholics for the Right to Decide, an entity that, despite its name, has no formal link with the Catholic Church and acts directly contrary to that Catholic doctrine on abortion. . The entity received donations in four different years (2007, 2008, 2010 and 2015), totaling US$ 2007 thousand the total resources received from the North American foundation.

Another institution intensely involved with the expansion of abortion clinics in the world to maintain a partnership with Instituto Patrícia Galvão is International Planned Parenthood Federation (IPPF). Planned Parenthood made headlines on sites around the world in 2015 due to a scandal in which recordings were released in which representatives of the institution clandestinely sold organs from aborted fetuses.

In 2018, with the support of yet another international organization, this time a Global Health Strategies, Instituto Patrícia Galvão promoted a kind of journalism award for stories that positively present the legalization of abortion in Brazil. The language chosen by the NGO to explain the proposal was that it was about supporting “proposals for investigative reporting on the problem of abortion in Brazil from angles that have not yet been explored, offering journalists opportunities to investigate, research in depth, gather data, consult specialists and develop content that is instigating and of public interest on the subject.”.

The public notice promised to finance the reporting project, that is, it would give money to produce them. The five best proposals would receive the amount of up to R$ 10 thousand reais each. Later, the institute reported receiving around 200 proposals from journalists across the country. The journalists who had their proposals selected would have signed a product delivery contract in which the rights and responsibilities of the parties involved would be defined.

In the morning of the day 28 in April, the report contacted Instituto Patrícia Galvão, informing that it would be mentioned in this article and inviting some representative of the institution to participate, answering questions from Gazeta do Povo. There was no response from the entity until the text was closed.